This Blog provides a platform to showcase new and emerging research in the field of dispute resolution. As such, I have invited Danielle and David Hutchinson who have an interest in neurodiversity, including its implications for mediation, to write a piece. Thank-you for sharing, Danielle and David.

Research into neurodiversity is on the rise. As the concept makes its way into the zeitgeist, it’s time for us to start thinking about the many implications for mediation.

Neurodiversity is an overarching term that refers to the variation in people’s behaviours and traits arising out of neurodevelopmental difference. While there is still debate about what differences fall under this umbrella, it typically includes autism spectrum disorder[3][4] (ASD), attention deficit hyperactivity disorder (ADHD), dyslexia, dyscalculia, dyspraxia and Tourette’s syndrome[5].

Within the current understanding, neurodiversity differs from mental Illness in that it is not about a person’s state of mental health or wellness. Instead it is a healthy state that is simply neurologically distinct from that of ‘neurotypicals’. One of the common features of neurodiversity is that the difference between strengths and weaknesses are often magnified. For example, there may be an unusually large disparity between a person’s verbal reasoning and their working memory. While the variation is unique to each neurodiverse person, a familiar trope is that of the absent-minded professor. Diagram 1 shows common strengths and weaknesses for each condition[6]. 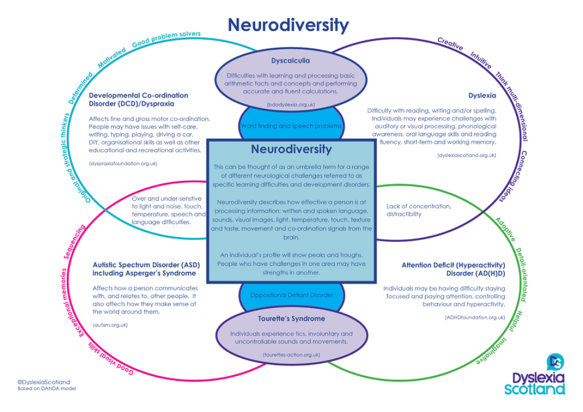 Why is this important to mediators?

Research into neurodiversity is still in its early days. However, it is starting to become apparent that that this disparity between finding some things extremely easy and other tasks almost impossible, can lead to confusion, frustration and misunderstanding in a range of contexts. This can be particularly so where the neurodiverse person has chosen not to share their diagnosis or is unaware of their neurodiversity.

Unfortunately, recent research into neurodiversity has shown that it is not uncommon for “employers, work coaches and authority figures to conclude that the individual is ‘not trying’, when undertaking particular tasks. Inconsistent performance is mistaken for a bad attitude or poor motivation, which leads to discrimination and perceptions of unfairness on behalf of the individual.”[7]

Given the potential for conflict to arise in such situations, and current estimates that as much as 30% of the population may have some form of be neurodiversity[8], it seems inevitable that as mediators we will need to consider the different ways that neurodiverse people make meaning of their interactions with others. More importantly, if we are to ensure that our practices are truly inclusive, we must start to consider the ways in which our practices may be premised on neurotypical assumptions.

For example, the following table outlines a few differences common to ASD and/or ADHD that may be misinterpreted as the neurodiverse person being deliberately difficult or as demonstrating traits of a high conflict personality.[9]

When we consider the typical facilitative mediation, it becomes apparent that we may have unintentionally set some neurodiverse people up to fail.

Each of these neurodevelopmental conditions manifests uniquely in each person, hence the catchphrase, “When you have met one neurodiverse person, you have met one neurodiverse person”. As mediators, it is not our role to diagnose or make assumptions. However, it is important that our practices are inclusive and can enable the full participation of all people involved. In providing an inclusive environment we can start harnessing the many strengths of neurodiverse participants to find mutually beneficial and sustainable outcomes for all.

[1]Danielle Hutchinson is a lawyer, mediator, author and co-founder of Resolution Resources. Danielle has lived experience of neurodiversity and, in consultation with experts in the field, is investigating neuroinclusive practices in mediation.

[3] Difference as opposed to disorder is now being used by some researchers in the field e.g. Fletcher-Watson & Happe (2019) and preferred by many in the ASD community

[4] The DSM-5 now includes Asperger’s Syndrome within ASD as ASD1. Even so, many people identify strongly with being an ‘Aspie’ and the term remains in use for those who wish to identify as such.

[5] First coined in 1998 by Australian sociologist, Judy Singer in research into Autism. While there is no formal definition, the term has been adopted broadly and is widely accepted as encompassing the neurodevelopmental disorders described above; see also ‘What is Neurodiversity?’ National Symposium on Neurodiversity at Syracuse University (webpage, 2011) https://neurodiversitysymposium.wordpress.com/what-is-neurodiversity/

[9] See the work of Bill Eddy and Grant Lester on high conflict personalities and the vexatious litigant.