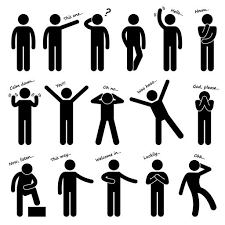 The term ‘visuals’ refers to all aspects of communication and messaging conveyed by the sender which are observed, as opposed to being heard, by the receiver. Body language is the most prominent form of visual communication. It involves our bodily appearance as well as our movements which express attitudes, feelings, emotions and other messages. For example, it could include a sender’s clothing, posture, body and limb movements, hand gestures, facial expressions, eye motions, and physiological reactions such as blushing, sweating and quickened breathing. The face and eyes are often portrayed as the most important conveyers of body language but micro-signals in these areas are not always easy to read and interpret. 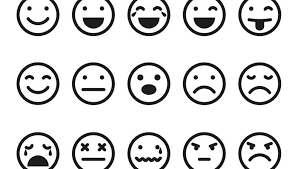 We can fake body language to some degree, but it’s not always easy, for example in relation to eye signals, facial expressions, blushing or shortness of breath. Children, in particular, find it difficult to conceal body language and their crossed legs or averted eyes may betray the apparent innocence of their spoken words. Unlike verbal communication, body language never stops and when a person is verbally silent it remains the only way in which they are communicating.

It is important for us all to be aware of the stark contrasts in body language messaging across diverse cultures, but some generalised features of body language and their possible meanings in western societies are:

Body language can either confirm or contradict what is being said verbally, or it might simply confuse. When it comes to interpreting body language it is dangerous to place too much weight on a single factor.

Body language in the form of ‘visuals’ also includes messages received from the broader environment such as the size of an office, the shape of a table, the size and height of chairs, seating placements, and lighting for example. These factors can sometimes convey power, strength, status, domination, tranquility or equality and other such messages more emphatically and unequivocally than words. Without any spoken terms, body language or other express communication, can convey a whole mood and atmosphere.

As the vocals are auditory signals (except of course for silence), it is difficult to demonstrate them through written words. However, the following illustration shows the different meanings which the same five words can have, depending on where the emphasis is placed by the speaker:

As with body language, some forms of vocal communication are difficult to disguise. Where the vocal messages contradict the spoken words, listeners tend to be influenced more by the vocal message than the words spoken. This can be demonstrated in relation to sarcasm where emphasis and tone can give spoken words a meaning diametrically opposed to their literal meaning. So, if you say the above sentence with the relevant emphasis and tone on both syllables of ‘awesome’ it can be received as a contemptuous comment on the books’ merits. There are many subtle deviations from literal verbal meaning that can be detected from vocal communication.

In our COVID-19 lockdown communications and negotiations our aim in playing the lockdown language game is to prevent, manage and resolve disputes effectively. For this reason, it’s important that we harness our dispute resolution agency and work hard to observe and interpret vocal messages and body language appropriately and with care. We need to take care not to assign a mistaken meaning to another person’s conduct – perhaps by using a summarising technique or asking clarifying questions (both these skills are discussed in more detail in later posts in the series).

In other words, sometimes we need to make tentative interpretations of visuals and vocals and check-in with the person we are communicating with to see if our interpretation is correct, never reading too much into a single cue. For example, a person’s sudden body movement might be caused as much by discomfort, habit or a medical condition as by anger or boredom. If a person frowns at something it might be that they are disapproving or upset, or it might simply be that they are distracted by something completely different or are unable to see clearly without their glasses. Where behavioural signals occur in clusters, for example dilation of the pupils, heavier breathing and distressed hand movements, they are easier to diagnose tentatively than where they are isolated occurrences.

Non-verbal signals are most significant where they are incongruent with the verbal message, for example where the verbal messages signify assent but the crossed legs or nervous eye-movements suggest resistance, or where the words suggest honesty but the higher pitched voice suggests deceit.

In lockdown, making intentional, positive choices about our own non-verbals, as well as about the ways in which we interpret the visual and vocal body language of others, is one way we can harness our dispute resolution agency for constructive communications and positively prevent, manage and resolve disputes.

The content of this post was adapted and reproduced from Laurence Boulle and Nadja Alexander, Mediation Skills and Techniques (LexisNexis, 3rd ed, 2020) paras 6.29-6.39 with the kind permission of the authors. Thank you Laurence and Nadja! Both Laurence and Nadja are esteemed members of the ADR Research Network and have long been leaders in the Australian and international dispute resolution communities.