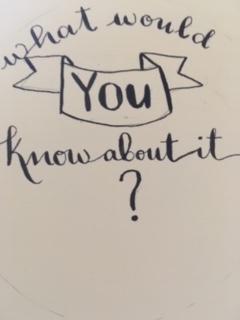 It was a phrase I’d imagined silently echoing in the minds of parties, co-mediators and solicitors, but this was the only time I had heard it vocalized.

It was uttered during one of my first coordinator roles in the civil courts of Scotland, where my role was to inform and promote the services of the mediation clinic to parties pursuing litigation under Simple Procedure. I was nervous to say the least. The aim of the role seemed unclear and, as an inexperienced mediator, I lacked authority and confidence.

The Sheriff’s strong critiques of a contractor’s failure to complete the building of a deck (over many years) had been heard, and it was suggested to the parties that they speak to the mediators present, in the hope of resolving the issue with no further legal action.

I believed this case was ideal for mediation. I introduced myself to the two gentlemen involved in the claim, explaining the potential benefits of mediation. It soon became apparent, by the respondent’s resistance, that he was uninterested in my pitch.

I continued my presentation and expressed my enthusiasm for mediation, until I was met with that phrase:

“What would YOU know about it?”

Fair enough – what do I know about the construction of a deck? Very little, and I was quick to articulate this to the respondent, adding, “Though, I am assured YOU know quite a bit on the matter, which is far more relevant to this case.”

I attempted to recover by reiterating that my role, as a mediator, was to facilitate a meaningful conversation between the parties, and that the subject matter, content and interests were determined by the parties and not myself.

But, as you may have guessed, this case did not mediate. It is doubtful that the Sheriff who would hear the case would have an exhaustive knowledge of deck construction either and the matter would ultimately come down to contract law, not construction. However, the participants had a lack of trust in both the mediation process, and in my experience and ability as a young mediator.

Perhaps, I have been mediating for longer than I realized. I was sought out on the playground to advise and resolve disputes such as, “Whose turn was it, really?” I dabbled in mediation before I knew the term (though my argumentative and opinionated personality did not reflect a high standard of impartiality).

I went on to explore the concept of issues and crisis management as a module in public relations in my undergraduate studies, before moving to my postgraduate studies, where I discovered mediation and alternative dispute resolution.

The field offered me the opportunity to combine my interests in working with people, taking a thoughtful approach, problem solving and creativity. Once commencing my studies abroad in Scotland, I continued to develop these skills while learning to implement strategy and theory into the practice. After clocking the necessary hours as a student mediator and meeting other requirements, I began to take on cases as a lead, co-mediating with current or past students in the Master’s program.

During these cases, it was assumed (more than once) that I was the trainee there to observe and learn from my more experienced counterpart. It didn’t matter that I was conducting, guiding and facilitating a majority of the process. People expected our ages to correspond with our experience level. My age spoke for – and continues to – speak for me as a learner, not as a mediator.

So, as a young mediator, what DO I know?

• I know how to be reflective on my thoughts, actions, feelings and how to convey these to others in an effective, impartial, genuine manner.

• I know that dealing with sensitive, complicated human emotions and interactions requires constant learning, adaptation and creativity, all of which I have a strong passion to continue pursuing.

• I believe that social intelligence learned through curiosity, and a strong desire to understand human behaviour, has assisted me in learning about people’s motivations and expectations. I have the compassion to commit time and sincerity to the cause and outcome of mediation.

• After time spent in the hallways and courtrooms of Simple Procedure, I have inadvertently learned more about the construction of decks (as well as showers, fences, window treatments, and doors for that matter!). I will learn about many content areas that cause dispute but mediation is about being heard, acknowledging needs and wants and arriving at a solution that maintains dignity.

• More importantly – I have developed an awareness of the need for sustainable conflict management skills. I work with and strive to use the mediation skills of open questioning, impartiality and listening both actively and passively. Parties are experts in their lives and what solutions they can accept, conflict is normal with problem solving as the key to conflict resolution.

• Lastly, I know I can’t possibly know everything about conflict and people management. Parties in mediation come from their own contextual backgrounds and they are the experts when it comes to their conflict and potential resolutions that would, or would not, suit them. Your curiosity and interest as a mediator show the parties that you are present, impartial and there not to enforce, but to guide them through the issues.

I urge young mediators (myself included) to continue to pursue opportunities for mediation experience and remind themselves of what we can bring to the table. I believe that young mediators have the skills and potential to contribute to the field and hope that employers and organizations can see this worth with offers of opportunities to provide the most coveted skill of all, experience.